School of the Ministry of Defense of the Russian Federation

Secondary school No. 21 of the Ministry of Defense of the Russian Federation was opened on September 1, 1994 by order of the Minister of Defense of the Russian Federation under the Combat Control Group for the leadership of the RF Armed Forces on the territory of the Republic of Armenia to train children of military personnel and civilian personnel of the RF Armed Forces. The school organizes hot meals according to the “hot breakfast” system at big breaks, and there is a buffet.
On the territory of the school yard there is a large sports ground with a soft surface; two playgrounds for outdoor games and walks; a garden and a place for students to relax and study in the fresh air. The language of instruction at school is Russian. In the 2021-2022 academic year, the school has 22 classes, 580 students. All students are on the first shift. The class size is from 20 to 30 people. 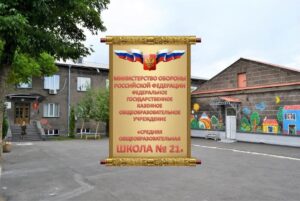 Distance from the center by car

Primary school (grades 1-4) with a mathematical bias. We tried to make a strong training program, in ...

In a school designed for 700 students, education is carried out according to the general education program ...

Secondary school No. 7 named after. V. Mayakovsky has a 70-year rich history. It is the only one in its…

Authorization / Registration
Login or Sign Up
Enter the last 4 digits
Enter the last 4 digits of the phone number of the incoming call. The robot will make a call to your phone number.
Change
You can request a call again via
Try Again
- Why should you sign up?
Special offer
available to you 10 out of 10 coupons
Get Code
Coupon activated!
Download
Please enter your name and email to receive your discount.
Coupon activated!
The coupon has been sent to your email and is also available on link.
available to you 9 out of 10 coupons.
Thanks
Coupon terms and conditions
School of the Ministry of Defense of the Russian Federation
+374 10 28 09 67
Opening hours from 09:00 to 18:00
54 Z. Kanakertsi str., Yerevan, Armenia
Were you able to call?
Rate the call